The beginning of a Rivendell journey.

Rivendell is, at its core, a set of computer tools for automating the acquisition, playing, and disposition of audio. Rivendell achieves this through a coordinated set of applications which are tied together with a database containing configuration details, audio metadata, and historical records; a storage volume containing audio files (sometimes called “audio assets”). It is most commonly used in broadcast and Internet radio stations.

After you obtain Rivendell, you start with a “blank slate”. That is, you get all the tools, and you must configure them for your station. This article is a brief guide to getting from “Zero” to “Playing” with links to necessary details.

The article assumes you have already installed Rivendell on a computer dedicated to running only Rivendell apps.

This article was originally written in August, 2020. Some of the links may be out of date or simply not work. The original author intends to keep this article and the others in this “Cookbook” up to date.

This block diagram shows roughly how (some of) the various Rivendell applications work. 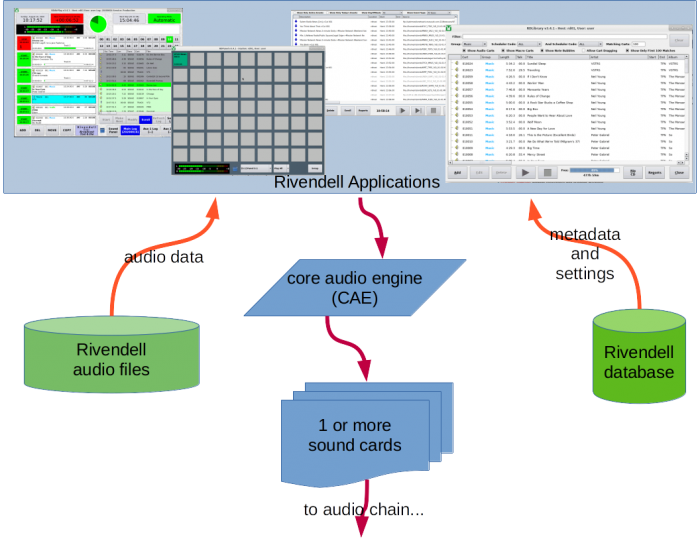 But in order to get to the point of actually playing audio, you need to get that audio into the system. And before you do that, you need to set decide how you’re going to organize things. Start with the basics of your station.

A Station is a “Service”

Tell Rivendell the basics of your station by configuring a “Service”. The Rivendell installation process defined a “default” Service for you, named “Production”. You can change that configuration by launching RDAdmin and selecting Manage Services. Here’s how that looks (pretend that “HD2” Service isn’t there):

(As an aside, notice how Rivendell windows typically contain large buttons, and each task is opened in a new window. This is because Rivendell apps are coded with the intention of being used on a full—sized touch screen display (that is, not a phone or tablet). Using a mouse or other pointing device works just fine, but you’ll find that navigating a Rivendell system is speediest and most efficient with a touch screen.)

The Production Service contains “global” settings that apply to all aspects of that station.

Audio Tracks are Organized by “Group”

Similar to physical file drawers and sticky labels, we are going to file all the audio tracks. Rivendell uses the old-school radio term “Cart” for audio tracks (and other things), so the terms track and cart are mostly interchangeable.

One Group may (and will) contain many Carts; each Cart belongs to exactly one Group.

Here is an example of the Groups for one station: 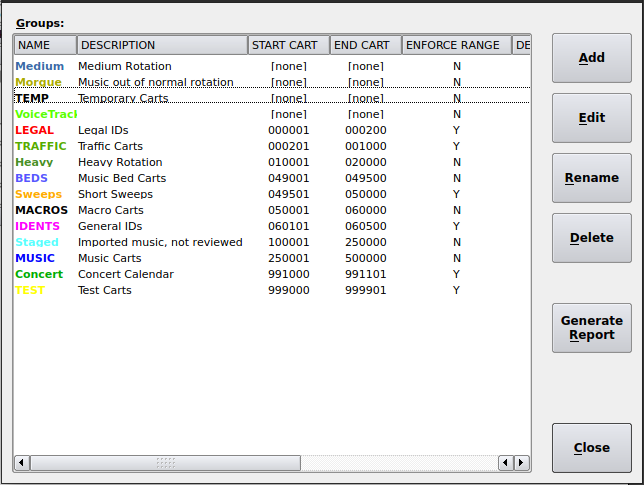 Notice the colored Group names: people find it useful to make Rivendell things more easily identifiable by coloring them in a consistent manner. More on that later...

Audio Tracks are Stored in the Library

All your audio resources (songs, commercials, promos, pre-recorded shows, etc.) are stored and managed in the Rivendell Library. The Library manager app is RDLibrary (creative, eh?). Every audio track belongs to exactly one Group.

“Playlists” are Played by RDAirplay

Rivendell playlists are called “Logs”, and they typically cover the duration of one day (from midnight to midnight). The Rivendell player is RDAirplay. RDAirplay is a tool meant to be used both interactively, and non-interactively. For a fully automated station, you typically start RDAirplay and simply let it run. New daily Logs are automatically loaded at the end of the day.

But RDAirplay is also an interactive tool for live in-the-studio DJs and show hosts.